Named after the French word for Little Wheel, Roulette has been a worldwide phenomenon in casinos around the globe, both land based and online, for many years now. From the good old days in 18th century Paris when the game, in it’s current form, was thought up, to the high streets of today where every bookmaker has a machine offering the game at the touch of a button. Its popularity is unquestionable and higher unlikely to ever waver.

The rules are simple enough; The wheel is spun and a ball-bearing scampers round the outside whilst bets are available to be placed on where the ball will land. Options include Red or Black, Odd or Even, Top/Middle/Bottom Row, First/Second/Third Section or on the individual number you think the ball will land on. As you’d expect, the odds are calculated based on the probability of it happening plus a bit of margin for the casino to take home. An individual number pays 35/1 because there are 37 individual numbers the ball could land on and the casino then takes a margin too. To look at it from the outside, you’d probably assume it must be a game of pure luck.

For European Roulette, which is what we’re focusing on here, there is just one green zero, and therefore the house margin is a much lower 2.7% compared to it’s American counterpart, which has 2 x green zeros, and therefore a higher house margin of 5.25%. All that adds up to being better value for you, the player, and if you can couple that advantage with a strategy then you’ll give yourself a fighting chance. 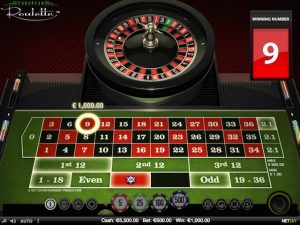 Firstly it’s important to say that there is no strategy in Roulette which can turn the situation round into a consistent edge in the player’s favour – it’s just not possible. Most of the strategies instead focus on clever bankroll management (staking strategies) and also the casino equivalent of ‘In-Play’ betting. I.e. the way you top up bets when certain things occur like the opportunity to Split or Double Down.

The Martingale system is the most commonly known and involves increasing stakes after each loss on the basis that the desired outcome will surely arrive soon. Barring a horrible run of results it’s usually a way of keeping things in check, but watch out for those max table limits!

The reverse Martingale (also applied in investment banking), as the name suggests, is the same but increasing stakes after each win instead of loss, and therefore trying to make the most of good runs of luck and keeping stakes small when things aren’t going to plan.

The D’Alembert Roulette System is another system that works on the even money bets only (Red/Black, Odd/Even) and follows a similar system to the Martingale but with the stake increases after each loss being that much smaller and therefore appealing more to some.

There is also a reverse option of the D’Alembert which involves increasing stakes after winning bets, again at a lower level than the Martingale, but this requires a high strike rate of winning hands to make a profitable session and is therefore more high risk but with more reward if you do have a successful session. 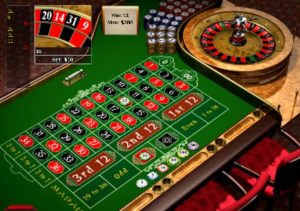 With hundreds of different staking strategies around to assist whilst playing Roulette it’s highly recommended you do a bit or research before playing. Or… just go with your gut and see how it goes!

However, just remember that these strategies are designed to improve your success. They most certainly do not guarantee success. They all still carry risk, and therefore the most important rule is as true as it ever is. Only gamble with money that you can afford to lose!